After a week of being off the weather cooled down and Marks Rpi Cluster is running again.

During the week of down time I took the opportunity to replace the SD card on the Pi that kept dropping off the network. That meant taking the front panel off the Edge Cluster 12 (EC12) to get to it. While there I noticed it had a lot of dust around the two fans so I gave it a bit of clean with a paint brush and a blower. Having cleaned one EC12 I then had to clean the other one given they've both been running 24/7 since I got them.

I managed to get another Pi4 2GB to use as a proxy server. I'm trying to work out some way of load balancing the proxy servers. If worse comes to worse I can just have each EC12 using a different proxy server but that isn't ideal.

Marks Rpi Cluster is currently idle. Its been warm so not much has been done for the last week. I managed to get a days worth of crunching in before it got hot again.

I had one Pi4 that kept dropping out when I look at the cluster through BOINCTasks. I ended up clearing some space on its SD card, even though it said it was only using 8% of it. However when I did a fstrim -av it released over 3Gb of disk space. After a reboot it seems to be behaving again. Raspberry Pi OS has the fstrim service running by default, where it will run once a week to release disk space so I am not sure why this one Pi had an issue. I suspect it may be time to replace the SD card but that means shutting down all the nodes in the EC12, powering it off and then removing the front cover in order to get to it.

I plan to continuing crunching with the Pi cluster, weather permitting next year. I don't expect any major updates unless they release a new Pi. I would like to get the cluster using network booting rather than SD cards so some study and experimenting next year.

Marks Rpi Cluster continues to run. The last two weeks have been running 24/7, but tomorrow is forecast to be hot again so it will be back to running overnight when its cooler.  In addition to the 20M credits for Einstein@home three of the Pi4's, the first three put into service, have each got to 1M in host credits.

I'm still trying to get another Pi4 2GB to spread some of the network traffic. I had a email alert that they were in stock but by the time I got home and checked that night my usual supplier was out of stock again. These would have been some of the 100k or so Pi4's that Eben Upton talked about releasing to the hobbyist community. I saw an interview on the Explaining Computers YouTube channel with Eben where he didn't think they would be back to normal production until the 2nd half of 2023. 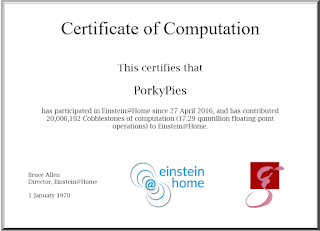 Here is the certificate for Marks Rpi Cluster passing 20M credits for the Einstein@home project. The cluster is currently idling due to the heat, but as things cool off overnight it will get it going again.

Last week saw the Einstein@home download server not giving out any work due to filling the file system. At one point Marks Rpi Cluster had over 150 file transfers stuck while downloading. The project advised to abort them so the cluster was idle for a couple of days due to lack of work. Running a BOINC project requires constant maintenance and problems happen from time to time. I think the project staff do a great job of dealing with issues as they arise.