I bought a couple of these 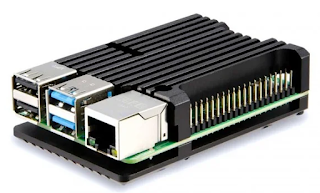 They call these the Heatsink Case. These cases are basically 2 pieces of anodised aluminium, some thermal pads and 4 screws. They are also available in a gold colour. With an ambient temperature of 25 degrees C they hover around 67 degrees when crunching so they help but are not as good as a fan case.

Having done the cases, both of these Pi4 4GB have been added to the cluster until the Pi^4 cases are sorted out. That brings Marks Rpi Cluster up to:

Kernel update
In other news the Raspberry Pi Foundation upgraded the kernel from 5.4 to 5.10 which has only recently been released. Debian haven't even got their 5.10 kernel out of testing yet.

The Rosetta app doesn't like being stopped and started which means I have to run each machine down so it has no work on board before upgrading it.

Plans are underway to swap all of the Pi3's out, and are being held up by the 3D printing studio. The intention is to get to 12 x Pi4 compute nodes. All of the Pi3s have transitioned to running a 64 bit operating system and the optimized Einstein app.

The Pi4 compute nodes also do Rosetta@home in a 50/50 resource split. Rosetta is out of work at the moment so they are only running Einstein.

The cluster continues to operated in a reduce capacity. This is due to having four of the Pi3's and a Pi^4 case still off at the 3D printing place. I need to chase them up. They were in the process of moving from the inner-city to the lower north shore so I expected some delay on getting a modified case design.


Switching Pi3's to 64 bit
Meanwhile there are still 3 x Pi4 (8GB) running a mix of Einstein and Rosetta work and there were 6 x Pi3 running Einstein. I say were because I am switching the Pi3's to Raspberry Pi OS 64-bit. I had one converted and its been running for almost 4 weeks. I converted another two this morning. Only 3 more to go...


Experiments with Ansible
I had a bit of a play with Ansible after seeing Jeff Geerlings videos on Ansible 101. Things didn't quite work out as expected because I don't use password-less ssh. I'll have another try later. One issue I have is you can't use a Windows machine to manage the cluster (with Ansible) so I have to use another Pi or Linux machine as the Ansible host.


Raspberry Pi news
The Raspberry Pi foundation released a fan for the official Pi4 case. It sits inside the case and is claimed to get the temps down to 66 degrees. 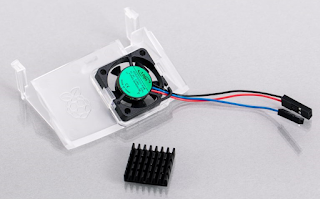 There was a Debian point release combined with the traditional end of year Raspberry Pi OS release. You can download the latest updates using apt. Unfortunately the SD card image on their website has only been updated for armhf (32 bit) at the moment.

While searching the web this week I came across a link to the Turing Pi/Pi2. See Turing Pi

Basically the Turing Pi is an mITX board that you plug a number of Raspberry Pi Compute Modules (CM) into. It holds up to 7 CM, CM2, CM3 or CM3+ modules. The Turing Pi2 is a rework of that design to use the Compute Module 4 which is based around the Raspberry Pi4 SoC and has slots for 4 CM4 modules. This should be great for a cluster of Pis when its released.

While looking there I ran across a video clip from Jeff Geerling explaining what the Turing Pi is which then led me onto his other Raspberry Pi videos. I had heard of Jeff but wasn't aware he also has a YouTube channel. I had a look at his series called Ansible 101 on a Pi cluster which I will try soon. See Ansible 101